Terminals formed from copper alloy material are used with connectors to join a variety of automotive electrical components. Reflow tin plating and other types of surface treatment are applied to maintain electrical connection reliability.

The number of connectors have been growing in recent years due to the increase in electrical components in cars. Furthermore, as the number of terminals per connectors (multipolarization) has been increasing, the demand for copper alloy material with reflow tin plating is anticipated to further grow.

Automakers have been strongly demanding lower insertion force for connectors, as joining work is done by hand and the work load is high. Kobe Steel’s New Reflow Plating technology disperses a hard copper-tin intermetallic compound phase on the surface of the soft tin-plated sheet to lower the friction coefficient. In comparison to conventional reflow tin plating, Kobe Steel’s New Reflow Plating technology has an insertion reduction force that is 30 percent lower. New Reflow Plating has received high acclaim for reducing the work load and improving productivity. Since 2009, domestic automakers have gradually adopted this plating. In addition to a low friction coefficient, combined with high heat and contact reliability under a sliding environment, this plating has often been adopted in terminals in the engine room.

Due to the globalization of automobile production, automakers have been seeking to improve the global supply network for materials. In September 2014, Kobe Steel provided Wieland-Werke AG, a major German producer of copper products, with the same technology license. The license agreement with Aurubis Buffalo further improves the worldwide supply network of copper strip that uses New Reflow Plating technology.

Advancing the development of copper alloys and plating technology to continue meeting market needs, as well as further improving the global supply network, Kobe Steel is striving to respond to customers’ requirements throughout the world.

Reflow plating is a process by which copper alloy sheet undergoes additional heat treatment after conventional tin plating. A disadvantage of tin plating is the formation of whiskers after plating. Whiskers are microscopic metal fibers than can cause short circuits between terminals. After it is plated with tin, the copper alloy sheet is heated to a temperature that melts the surface layer of the plating and is then cooled. This heat treatment suppresses the formation of whiskers.

Kobe Steel's New Reflow Plating is designed to bring portions of the hard copper-tin intermetallic compound phase, which lies between the copper-alloy sheet and tin plating, to the surface of the sheet to achieve low insertion force. In addition, a nickel undercoat layer provides outstanding high temperature reliability. 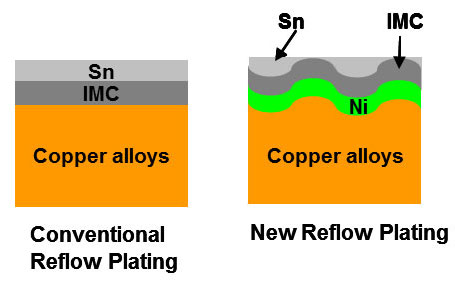 Kobe Steel specializes in copper alloys for automotive terminals and connectors and for semiconductor leadframes. In both fields, Kobe Steel estimates that it has one of the largest market shares in Asia.

Kobe Steel has locations in China and Thailand to slit copper coils produced at its Chofu Works, promoting the global supply of this material. Semiconductor leadframes are produced in Kita-Kyushu, Fukuoka Prefecture in Japan and Singapore.