Tire testing machines are used for final inspection and quality checks of passenger car, truck and bus tires in the manufacturing process. The machines verify the uniformity, runout and other properties of tires.

In the field of tire uniformity machines, Kobe Steel is regarded as the top manufacturer with an estimated 30 percent world share. Kobe Steel plans to supply the new model to tire makers in North America, Europe and regions throughout the world, aiming to capture a further share of the market.

The Librota-GS is a more advanced version of its predecessor, the Librota, which was launched in 2013. Kobe Steel has received high acclaim from customers for the Librota, supplying about 70 units mainly to China and Southeast Asia.

In the Librota-GS, Kobe Steel has succeeded in shortening the cycle time to 18 seconds, from 20 seconds in the previous Librota model, by incorporating a newly developed control system and optimizing measurement conditions. This enables tire makers to achieve a 10-percent increase in productivity, compared with conventional tire uniformity machines. In addition, options such as a sheet-of-light laser geometry system and a shoulder grinder can be installed to meet a variety of needs.

Kobe Steel has been manufacturing and selling tire uniformity machines since 1967. Kobe Steel also has an extensive record of supplying rubber mixers to major tire makers with an estimated 40-percent share of the world market. Expanding overseas, Kobe Steel’s tire and rubber machinery business has manufacturing and sales bases in four world locations: Japan, the United States, China and India.

The amount of time necessary to test one tire. As passenger car tires undergo a comprehensive inspection, the shorter the cycle time, the higher the productivity.

Sheet-of-light laser geometry system：
Point lasers have been traditionally used to measure tire roundness and irregularity, but this measurement device has a line laser of 256 points to improve measurement accuracy.
Shoulder grinder：
A device to reduce the shoulder of a tire, leading to lower vibration and noise, to improve tire performance, 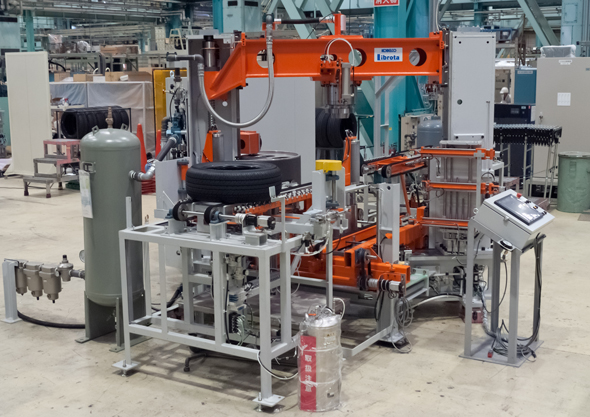