Kobe Steel, ASAHI SHIPPING CO., LTD. and MIURA CO., LTD. began joint development of a binary cycle power generation system for ships in April 2014. Land-based testing of the system was successfully completed in September 2015. In December 2016, the system passed sea trials on a ship, and recently it received approval from Japan’s ship classification society Nippon Kaiji Kyokai (also known as ClassNK). Having passed these tests, the new system will be marketed from April 2017, with sales starting in April 2019. Kobe Steel is in charge of marketing and sales.

In the past, the exhaust heat from the turbocharger attached to the ship engine was not used, but simply disposed. Kobe Steel’s new system is the first in the world to generate electricity from the exhaust heat emitted by the ship’s turbocharger. The electricity produced by the new system serves as auxiliary power for the ship and contributes to the efficient utilization of energy. In the sea trials, Kobe Steel confirmed that an engine output of 7,500 kW per hour generated 125 kW of electricity. This is equivalent to about 20 to 25 percent of the fuel used in marine generators, depending on the conditions, and is the largest scale of power generation from exhaust heat on a ship.

Through the new system, the three companies are promoting the effective utilization of unused energy. This project to develop the binary cycle power generation system was adopted as a joint research theme by the next-generation marine environment-related technology development support program of Japan’s Ministry of Land, Infrastructure, Transport and Tourism and ClassNK and was undertaken with their cooperation.

Roles of the companies in the project

MIURA:
Developed the evaporator (a part of the main engine air cooler) to recover heat 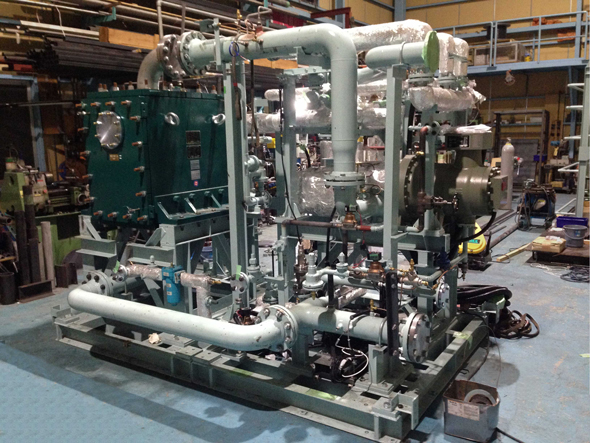