Kobe Steel receives approval of 1.15 as the factor K for throw components of built-up type crankshafts

TOKYO, August 23, 2017 — Kobe Steel, Ltd. has received certification from the Nippon Kaiji Kyokai (also known as ClassNK or NK) of 1.15 as the factor K, a world first, for the design margin in the manufacturing process for throws, a main component of built-up type crankshafts for ship engines.

The certification was approved by combining the Super Clean Steelmaking Process and a die-forging method developed by Kobe Steel, utilizing its strengths as an integrated forging manufacturer. The approval of 1.15 as the factor K for the calculation of the fatigue strength exceeds the 1.05 certification that Kobe Steel received in 2014.
Factor K of 1.15 recognizes a margin of 15 percent to design engines using high-strength crankshafts supplied by Kobe Steel and opens the possibility to design compact ship engines with high output.

Nonmetallic inclusions in steel are a factor in reducing fatigue strength, and reducing these impurities is important to maintain the cleanliness of steel. Conventional clean steel contains a reduced amount of large sulfur inclusions. However, through its proprietary refining equipment and reaction control technology, Kobe Steel is able to minimize sulfur as well as all other inclusions to achieve steel of higher cleanliness.

In recent years, the trend toward eco-ships has been accelerating in the ship industry. The need to improve fuel efficiency is growing due to stricter environmental regulations and the need for higher energy efficiency during ship operation. Ships will have to have environmental equipment installed for engines to meet exhaust emission regulations from 2020 on, requiring further space savings.

In addition, ships are using larger propellers that rotate at slower speeds, driving the need for higher output at the lower rotating speed region, and engines as a whole tend to be increasing in size due to the lengthening of the engine stroke. As a result, the need is growing for more compact engines to improve fuel efficiency and secure more cargo space.

Kobe Steel’s certification of 1.15 as the factor K and the application of its high-strength material make it possible to manufacture crankshafts that can bear higher loads. Engines can achieve higher output equivalent to one engine cylinder, leading to compact engine design, for example due to the fewer number of cylinders. At the same time, compact engines will make it possible to secure more space to install the necessary environmental equipment. Kobe Steel plans to explore possibilities for weight savings and compactness together with engine makers and ship builders, further contributing to the development of the shipping and shipbuilding industries.

A crankshaft consists of a shaft portion called the journal and offset arms on the crank called throws. A crankshaft converts the reciprocating motion of the engine pistons to rotational motion of the shaft to transmit power to turn the propeller. Crankshafts come in two varieties: built-up and solid. The built-up type is mainly applicable for large crankshafts.

A factor used in calculating design fatigue strength. In comparison to a standard value of 1.0, Kobe Steel’s high-strength material is approved for a strength calculation of 1.15. The margin from this factor can be directed to making engines more compact.

A method of forming the throw developed by Kobe Steel in 2014. In the die-forging method, the steel is shaped by forcing it into a die, resulting in a high-quality piece with no segregation and higher fatigue strength, compared with the conventional bending method of forming. 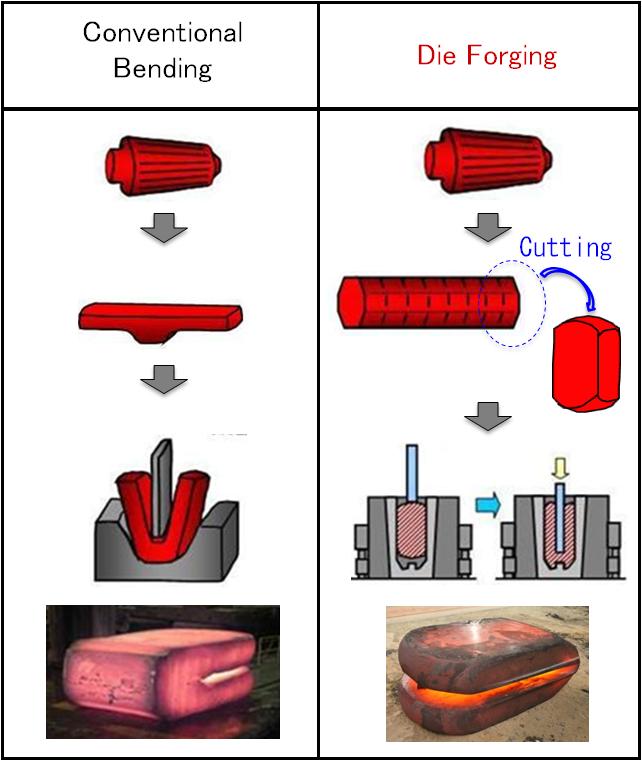